I recently bought a used Sony Alpha 55 camera body on Ebay for almost $200. I think it was a good deal. The reason I bought it was so that I could use the old Minolta Maxxum lenses (Sony bought out Minolta in 2006). These lenses focus without requiring a motor, which is now incorporated inside the Minolta Maxxum (or now, Sony Alpha) body. My reason for buying the Alpha was the promise of sharp Minolta lenses at a bargain price. My Maxxum collection plus the Sony Alpha 55 I have to admit, I was not blown away by the Minolta lenses, especially the zoom lenses. But I will have to say that the Sony compared well to my Canon T2i, despite the Sony only having a 16mp sensor, whereas the Canon utilizes an 18mp one. Regardless, I enjoy having a lot of lens choices with the Sony Alpha, since there are many Minolta Maxxum lenses to be had for cheap. My 28-300 lens covers a great range, but sadly, I can see some evident purple fringing (chromatic abberation). I suppose you really do get wha
Post a Comment
Read more
- May 09, 2019 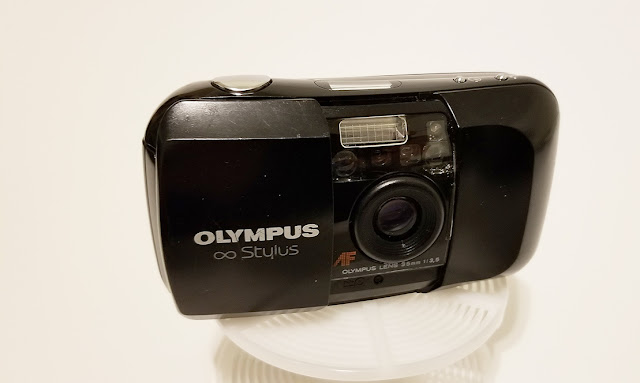 Ok, I recently acquired an Olympus Infinity Stylus off of Ebay. It was maybe $25, but the flash doesn't work, and the window that shows the film roll's ISO and EXP is covered with black gaffers tape, since the clear plastic that is normally there is gone. But I had to have this camera, and it was cheap, just to see what this thing could do. Usually an overpriced camera on Ebay See tape covering the hole? Well, after I developed the film, I was amazed by the contrast by just looking at the film strip. I couldn't wait to scan each image. Now that I'm scanning the negatives, I am getting disappointed, as many images are blurry. Not sure why that is. Maybe something wrong with the lens mechanism? Or maybe it was too dark outside? It's blurry! Regardless, I've included some of the images in this blog post so you can see that this camera still has some potential. But I doubt that I will be using it anymore, I already have lots of film cameras, and b
Post a Comment
Read more

Oh yes, what a camera, the Canon Photura. Came out in June of 1990, and was priced at around $250 according to jollinger.com's review of the camera. Looks like a video camera when you hold it up and use it (or a rocket according to Canon's literature). I'm sure that's what other people are thinking when I take pictures with this camera, that I'm taking video. I got it at Savers (a thrift store) for about $7. Strangely enough, they had two of these cameras on the shelf for sale. The other one had a different name, I think it was Epoca, but other than the name difference, it was the same camera. It's basically a point and shoot film camera, a lens with a camera built around it. It has a nice zoom, some different flash modes, self timer, and a tripod mount. The zoom lever on this camera is iffy, and sometimes doesn't engage, which is very frustrating. It's like the camera isn't even on. It's lightweight, but bulky, mostly a giant piece of
Post a Comment
Read more 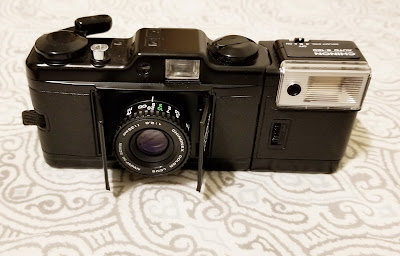 So this little camera is fun to shoot. Unfortunately it uses zone focus, which isn't the most accurate, but can still produce good results. It was manufactured in 1980, so I'm thinking this camera has seen some use. The only real issue I had with the camera was that the film advance would work 50% of the time. So I got lots of double exposures. I would have to try and wind, it would fail, I would shoot a picture (with the lens covered), then I would have success with the advance working most of the time. So not a reliable camera, guessing the gears are slipping, but still very usable. And you have to admit, it looks pretty cool. Chinon Bellami Here are some images that I shot and developed in monobath, then scanned with my Epson V600. I like the images, but others not included here had lots of dust and dried water spots, I need a better wetting agent, and maybe I should prewet before developing, but most say that's not necessary. I am starting to believe that it is
Post a Comment
Read more 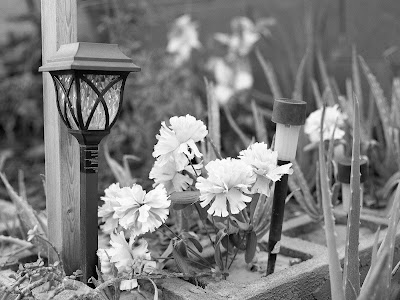 So, as I promised, here is part II of the Zenza Bronica images. This time I shot on Ilford Delta 100, which provides better grain and sharpness. I also developed this roll in monobath, same as before. I am quite pleased with the results. You can see the images that I have scanned are looking better than before. Our backyard. The image that impressed me the most is the picture of my wife in our backyard. I did not apply any sharpness or contrast adjustments, only resampled in Photshop. The only tweaks applied were from the Epson scanner interface software, I believe I had the sharpness set to medium during the scan, that is all. The wife wearing protective clothing against the bugs. The remaining images came out well, but not as nice as the previous image. Still, much better than my first results. I really like this medium format camera. Plastic statue clock in our house. The grandfather clock in the living room.
Post a Comment
Read more 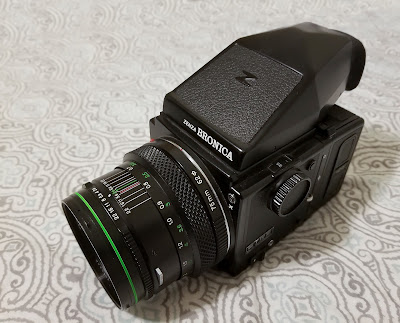 I spoke about this camera before in one of my earlier blog posts, as I was pretty excited when I scored a group of film cameras. I go a little more in depth here in this post. Got the Zenza Bronica ETRS medium format camera on 12 Jul 18, at one of the Goodwill stores in Gilbert, AZ. Seems some film photographer dumped his entire film collection here, along with a few old digital cameras. Zenza Bronica ETRS Everything I bought came with an additional 20% off, since you can apply online for this coupon, which I did, but the discount never showed up on my phone. The guy working there gave me the discount regardless. Great deal. So while this medium format camera was marked @ $129.99, I got if for about $103. I've never owned one of these before, so I was excited. I got an additional lens for $20, and of course bought some other high end film cameras while I was at it. A week or so later, I bought some 120 film from Tempe Camera, and loaded up the Bronica. I had to read some
Post a Comment
Read more 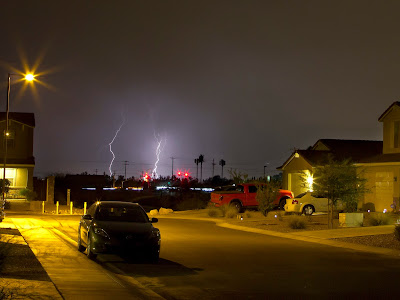 I currently live in San Tan Valley, Arizona. Lately the weather here has been kind of exciting. Lots of rain, dust storms, and more recently, lightning. I can do without the dust storms, but the lightning is always fun. 18 sec, f13, ISO 400 When I shot these images, I stayed close to my garage and roof of the house. There wasn't much lightning overhead, more so in the distance. However as I continued to shoot photos, the clouds overhead did start to get some streaks of powerful lightning, so I eventually went inside. I'm sure there are better more conductive objects than my metal tripod, but I figured I didn't need to take that chance. The following image had to be edited more than I like in Photoshop, due to the light streak from a nearby aircraft, which basically made it a straight distracting line in the image. It was more difficult than I imagined, since the spot healing brush did a poor job, and I had to use the clone brush to repair some of the smudges and m
Post a Comment
Read more
More posts